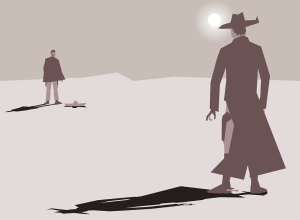 Our second Final Four matchup is a battle of London lads: Elvis Costello vs. The Beatles.

A nice connection here, as Costello has been a die-hard Beatles fan since he was nine years old and 27 years later teamed up with Paul McCartney to write an excellent batch of songs that both men released on future albums.

Costello made it here by beating Carly Rae Jepsen, John Mayer and Michael Jackson in the first three rounds, then toppling the resilient Taylor Swift with 78% of the vote. The Beatles defeated Shakira, Ben Folds and Lyle Lovett before besting Randy Newman with 75% in Round Four. Quite a gauntlet.

This half of the Final Four is identical to the one I arrived at when running through these brackets solo. That means three of the final four artists in the community version match my own picks. Great minds think alike!

This is truly a matchup without a loser. I’ll be thrilled to see either contestant advance, and saddened to lose the other. Both are top five artists for me and have been for a very long time.

I’ve been a Beatles fan longer. Like a lot of young people, regardless of generation, I discovered the Fab Four in my teens and gobbled up their catalog until I knew it by heart. Once, during a lazy 9th grade summer, I typed out the lyrics to every one of their songs. By ear, on a typewriter.

It’s with the spirit of that 14-year-old kid that I’m voting for the incomparable Beatles today, even against one of the greatest singer-songwriters ever.

[Note: An earlier version of this post featured a performance of ‘Penny Lane’ by Costello at the White House during Barack Obama’s presidency. I later realized I had featured that song on the blog before — a big no-no! — so I replaced it with this song.]

[Verse 1]
Is there anybody going to listen to my story
All about the girl who came to stay?
She’s the kind of girl you want so much
It makes you sorry
Still, you don’t regret a single day
Ah girl
Girl, girl

[Verse 2]
When I think of all the times I’ve tried so hard to leave her
She will turn to me and start to cry
And she promises the earth to me
And I believe her
After all this times I don’t know why
Ah, girl
Girl, girl

[Verse 3]
She’s the kind of girl who puts you down
When friends are there, you feel a fool
When you say she’s looking good
She acts as if it’s understood
She’s cool, cool, cool, cool
Girl
Girl, girl

[Verse 4]
Was she told when she was young that pain
Would lead to pleasure?
Did she understand it when they said
That a man must break his back to earn
His day of leisure?
Will she still believe it when he’s dead?
Ah girl
Girl, girl