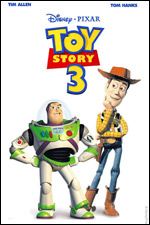 This weekend was a great one to be a movie fan. I saw the funniest movie of the year, the most exciting action film of the year and the sweetest, most touching piece of filmmaking of the year. And I did it all in the course of the 103 minute running time of Toy Story 3.

It’s become a cliche to sing the praises of Pixar year after year, as they clear hurdle after hurdle, extending the longest winning streak in Hollywood. Can they make transcendent entertainment out of a rat who can cook? A trash compacting robot? A man who lifts his house with balloons? Yes, they can, again and again.

And now this. How many third films in series not intended as trilogies have ever been any good? I can’t think of even one. Sequels to sequels are always cash grabs conceived not as artistic statements but as a way to beef up a studio’s portfolio. Can a third film about toys that talk really be creatively necessary, poignant and profound?

Yes, it can, again and again.

[Warning: Spoilers follow, including some major ones about the film’s ending, so if you care about being unspoiled and intend to see this film, you should come back after you have.]

As I write this my two daughters are in their bedroom taking pictures of their toys, so they can compare photos later and see if any of them moved while they were gone. Their mission epitomizes the sense of wonder, the joy of play, that has always been so wonderfully captured by the Toy Story films. Kids are always ready to believe that toys have minds of their own, so fully do they imbue them with small slices of their own personalities. 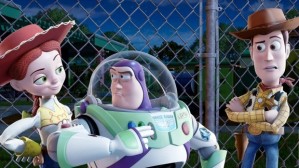 Andy’s toys, the ragtag bunch we’ve followed through these movies, have more personality than most. And in this film it becomes clear that it is Andy himself who has made them so special. Like a nurturing parent, he has made them feel loved and wanted and given them the fertile ground of his imagination in which to play. Contrast that to the abusive household of Syd in the first Toy Story or the clinical upbringing by the greedy collector in the second.

But Andy has grown up… he’s 17 now. Stinky Pete once said to Woody, “Do you really think Andy’s going to take you to college?” And suddenly the toys are faced with that very question.

As it turns out, the answer is yes, in Woody’s case, while the rest of the crew is relegated to the attic. Not a bad fate, all things considered — they’ll stay in the family and have what fun is to be had up there. Maybe Andy’s own kids will play with them some day.

But a mix-up results in them being donated to a local preschool instead. Sunnyside looks as first like the perfect home for a toy — an endless supply of children, no danger of being outgrown. But the newcomers are banished to the toddler room by Lotso, the cuddly but sinister bear who runs the place, and they soon discover there are few things more frightening than a bunch of 2-year-olds on a sugar high.

The film’s middle third is darker and more exhilarating than almost anything we’ve seen from Pixar yet. As Sunnyside becomes a prison, Toy Story 3 becomes a prison movie, complete with solitary confinement and a creepily sinister guard (in the form of the eeriest of all children’s toys, a baby doll). Another notoriously scary toy, a monkey with cymbals, runs surveillance, ready to shriek and clang at the first sign of suspicion. 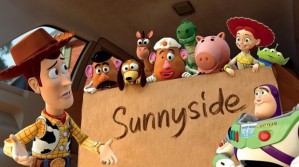 In the Sunnyside scenes, the film delivers heart-pounding suspense, belly laughs (especially from a Ken doll who finally meets his Barbie, and a Buzz Lightyear doll accidentally reset in Spanish mode) and a touch of Dali absurdity (in the form of a Mr. Potato Head who trades the potato for a tortilla). If Pixar could distill the imagination and creativity that went into the development of these sequences and spike the punch of every filmmaker in Hollywood, the world would be a much better place.

Then, somehow, they manage to top themselves. The end of this film is one of the best I’ve seen in years, one I want to revisit soon so I can fully appreciate its artistry. [And here’s where the big spoilers come in.]

After a series of narrow escapes that culminate at the city dump, the toys find themselves trapped in a mountain of trash moving inexorably toward a blazing hot incinerator. It’s the ultimate fate for most toys — to wind up in the trash — and our heroes are faced with it in the most dramatic fashion possible.

As they sink toward the flames, they each realize in turn that they’ve run out of options and, accepting their fate, they join hands for their final moments. In the theater, my daughter shook my arm from her seat next to me and asked “Are they going to be OK, Daddy?” I nodded and whispered, “Yes.”

But as I watched the looks of acceptance and peaceful resignation on the faces of each onscreen character, pixels on a computer that somehow convey such powerful human emotion, I suddenly realized I might have just lied to my daughter. And I further realized that, if I was wrong and this really was the end of the road for these toys, I’d probably be crying harder than she would.

I wasn’t wrong, thank heavens, but I think I cared more about the fates of those toys right then than I have about any human character in anything I can remember. 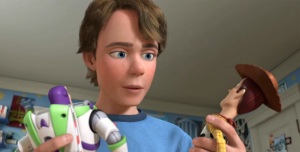 The toys make their way back home and, through a quick bit of ingenuity by Woody, are finally delivered by Andy to a young neighborhood girl who is worthy of them.

He presents them to the girl, Bonnie, one by one, singing the praises of each — from Slinky Dog to Mr. and Mrs. Potato Head, Jessie and Bullseye to Buzz Lightyear. Then Bonnie reaches for Woody and, in the most profound half-second of the movie, Andy flinches.

And then he lets Woody go. Just as his mother had let Andy go moments earlier, choking back tears at the site of his childhood room stripped of the accumulated trinkets that made it his.

In these final moments, it’s clear what’s always been so special about the Toy Story films. Woody and Buzz and the rest don’t just epitomize the thrill of imagination, the spark of creativity that brings inanimate objects to life. They represent childhood itself.

They are the undying belief in magic, the fear of what’s in the dark, the failure to get tired of the same game the 20th time through because it’s never really the same game, not to them. They are the pounding heart of innocence, gentle courage and excitement without boundary.

They are the magic that long ago flickered out in us, but not completely, and the magic we marvel at in our children and wish so hard will never flicker out in them… even though we know it will. Someday it will.

And now the verdict is in from the other room. My daughter shouts out: “Toys move!”

Yes they do, honey, in more ways than you can yet imagine.