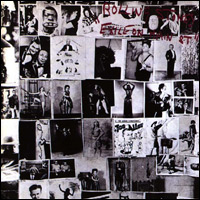 The best albums are always greater than the sum of their parts. Sometimes that’s just a matter of putting certain songs in a certain order and tying it together with the right title and right cover and — bam! — you have a consistent, unified experience that works as an album.

But other times an album serves as a document of its creation. Listening to it puts you in the room with the musicians, delivers not just the sounds but the sights, smells and tastes of its creation. The Rolling Stones’ Exile on Main Street is such an album.

Recorded largely in a rented French villa, where the band retreated to dodge charges of tax evasion in Britain, Exile sounds as weary, gin-soaked and strung out as the men who recorded it. Mick Jagger, Keith Richards and the rest of The Stones spent their time drunk, high and sleeping with each other’s girlfriends, only occasionally stumbling into the makeshift studio to record one of the most celebrated rock albums of all time.

The album features some brilliant songs — including ‘Tumbling Dice’ ‘Rocks Off, ‘ ‘Torn and Frayed,’ ‘Let it Loose’ and today’s SOTD (a tribute to the late Brian Jones) — but just as many throwaway blues jam sessions. What’s wonderful is how well those things combine.

The albums was completed in Los Angeles, with Jagger laying down new vocals on some tracks and adding gospel flavors to others, but it nevertheless sounds as if it sprang fully formed from that basement in Nice, a mangy mutt destined to win best in show.

When you’re drunk in the alley, baby, with your clothes all torn
And your late night friends leave you in the cold gray dawn.
Just seemed too many flies on you, I just can’t brush them off.
Angels beating all their wings in time,
With smiles on their faces and a gleam right in their eyes.
Whoa, thought I heard one sigh for you,
Come on up, come on up, now, come on up now.