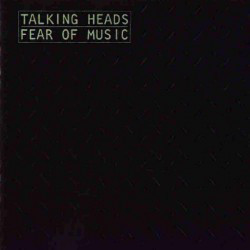 When today’s song — the opening track of the 1979 album Fear of Music — popped up as a Random Weekend selection, I was positively giddy. With lyrics based on a nonsensical Dadaist poem by Hugo Ball and music inspired by the African rhythms Byrne was increasingly drawn to, this song is unlike anything the band had done to that point, but still perfectly in character.

END_OF_DOCUMENT_TOKEN_TO_BE_REPLACED

Today’s post sets a record for the longest period of time between songs from the same album. I first posted a track from Talking Heads’ 1979 Fear of Music on July 27, 2008, nearly 10 years ago. It was song number three in my Song of the Day series.

It took me 277 days to revisit Ryan Adams’ Heartbreaker, the album on which Song of the Day #2 appeared. And 365 days between tracks from The Smiths’ Strangeways, Here We Come, home of Song of the Day #1.