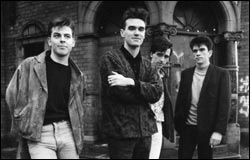 Inspired by this blog by the lovely and talented Malagueta, I’ve decided to write about a new song every day. I’m not sure how long I can keep this up… I currently have 7,798 songs in my iTunes library, so theoretically I can do this until I’m 56 using only my current collection. Throw in all the new music I’m sure to pick up over the next 21 years and it’s safe to say I can carry on for the rest of my life.

For now, I’ll concentrate on making it through next week.

To kick it off, I’ve chosen a song the title of which reflects my doubts that I’ll be able to carry out this daunting task. In the future I’ll choose songs pretty much at random.

‘I Started Something I Couldn’t Finish,’ the second track on The Smiths’ excellent Strangeways, Here We Come album, is among a long line of Morrissey tunes about forbidden love.

For somebody who has never officially come out, Morrissey sure does write a lot about gay people — this song seems to concern a man making a pass at a friend (“I doused our friendly venture with a hard-faced three-word gesture… I started something, I forced you to a zone and you were clearly never meant to go”).

Things don’t go so well and the narrator blames himself (“typical me”) and takes a little shot at a British penal system that punished homosexuality with jail time (“And now eighteen months hard labour seems … fair enough”). This line calls to mind Morrissey’s hero Oscar Wilde, who served two years hard labor for “acts of gross indecency with other male persons.”

Like just about everything The Smiths did, this song perfectly blends Morrissey’s vocals and co-writer Johnny Marr’s stellar guitar work. These guys were really a latter day Lennon/McCartney, so beautifully did their styles mix. Sadly, this album was the band’s last release (and they weren’t even together when it came out). The Queen is Dead remains their masterpiece, but Strangeways, Here We Come was a bold and fitting swan song.

I’d love to be able to post a download for each song I write about, but I doubt that will be possible. In this case, however, I was lucky enough to find the video on YouTube, so you can give it a listen and watch Morrissey ride around Manchester on a bike.

[Note: The aforementioned video was later removed from YouTube, so I have replaced it with another version of the song]