We have another chance for the Random iTunes Fairy to match a song to a milestone. Today is frequent commenter Dana’s birthday — Happy Birthday, Dana! — so he will have the chance to comment on a song chosen (randomly) just for him.

Well, this is a rather funny outcome. This is a remixed version of a cut on Ron Sexsmith’s sixth studio album, 2002’s Cobblestone Runway. And I happen to have featured the original version already, so we have Dana’s first reaction on record.

END_OF_DOCUMENT_TOKEN_TO_BE_REPLACED

After dominating this blog in 2011 during the controversial Ron Sexsmith Weekends, Canadian songwriter Ron Sexsmith made only three appearances in 2012. And here we are, more than halfway through 2013 when he makes his first appearance this year.

Today’s track is probably best known (to the extent that anything Ron Sexsmith does is known) because a second version was released on which Sexsmith duets with Coldplay’s Chris Martin. I’ve even seen the song posted online as a Coldplay tune featuring Ron Sexsmith (silly Coldplay fans!).

END_OF_DOCUMENT_TOKEN_TO_BE_REPLACED

I featured ‘These Days’ yesterday to ease into the more involved production of Cobblestone Runway. Today’s song shows the extent to which Sexsmith fiddled around in the studio on this record.

‘Dragonfly On Bay Street’ features a disco backing track and synthesized robotic sound effects… it’s the closest Sexsmith will probably ever come to the dance floor. But this tale of a man lost in life who draws momentary inspiration from an insect trapped in the city still feels like a Sexsmith song, just in fancier clothing.

END_OF_DOCUMENT_TOKEN_TO_BE_REPLACED 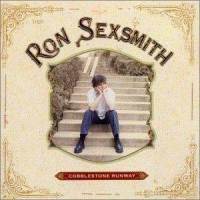 In 2002, one year after Blue Boy, Ron Sexsmith released Cobblestone Runway, a disc that marked his most significant leap forward in production values, not to mention confidence.

It’s hard to imagine the Ron Sexsmith of his first few albums recording a duet with Coldplay’s Chris Martin, as he does here on ‘Gold in Them Hills.’

And this is the first album for which I could readily find music videos of the songs. Sexsmith will never be the sort of artist who shows up in the VH1 Top 20 Video Countdown, but the fact that he strapped on a guitar and played for the cameras in interesting in itself.