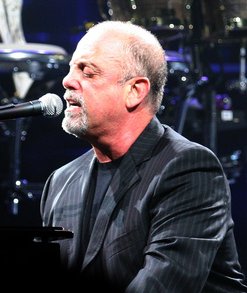 Four months, six rounds, 64 contestants, and one Montauk Madness champion. He appeared in the very first matchup and he’s here at the end. Ladies and gentlemen, your winner: Mr. Billy Joel!

Joel faced off against Elvis Costello in the final round, and it was quite a battle. In fact, the outcome was decided by our closest margin yet, 51% to 49%. Just a couple of votes separated these two well-loved entertainers.

Fans from both Billy Joel and Elvis Costello Facebook groups got into the act, and the lead did change a couple of times. Lots of passion from these fan bases.

I was a little upset to see that support for one man was usually paired with disdain for the other. Costello fans harumphed at the thought of a middle-of-the-road talent like Joel competing against their man (not to mention the presence of smart pop tunesmiths like Carly Rae Jepsen and Taylor Swift in the contest). Fans of Joel dismissed Costello as irrelevant.

Can’t we all just get along? These arguments remind me of our current political climate, where there is no longer any room for compromise. It’s ok to like both of these guys but like one more than the other. Or if you don’t like one of them, why not try to understand and appreciate why so many other people do?

Thank you to everybody who participated in Montauk Madness. I have one more loose end to tie up tomorrow and then we’ll resume our regular programming.

And this is why my eyes are closed
It’s just as well for all I’ve seen
And so it goes, and so it goes
And you’re the only one who knows