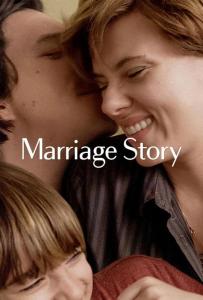 My final musical movie moment of 2019 comes from one of my favorite films of the year, writer-director Noah Baumbach’s Marriage Story.

The movie chronicles the acrimonious divorce of Charlie and Nicole, a theater director and actress played (in my pick for the best lead performances of the year) by Adam Driver and Scarlett Johansson. In a just world, they would each win an Oscar this Sunday. Instead, Laura Dern (who is quite good in a limited role) will likely be the only actor in this film recognized by the Academy. You can almost always count on these guys to get it wrong.

The film features two performances of songs from Stephen Sondheim’s Company. In the first, Johansson’s Nicole performs ‘You Could Drive a Person Crazy’ with her mother and sister, an upbeat number performed at a party after Nicole has won custody of the couple’s son.

That scene is followed closely by this one, in which Driver’s Charlie commiserates at a bar with co-workers and friends. Unable to adequately describe his feelings with words, he turns to song after hearing the first few bars of ‘Being Alive’ emerge from the piano.

Charlie proves his musical theater bona fides by performing the supporting cast’s spoken-word roles as well as the lead vocals. But his performance turns from campy to heartfelt as the words sink in.

‘Being Alive’ is a song about a longtime bachelor realizing the value of companionship, and all the good and bad that comes with it. Charlie is realizing those things as well, but too late to save his marriage.

Driver is such a fascinating screen presence, and he’s at his best here in such a showy, yet vulnerable, moment. I know he doesn’t like to watch his own work, but I can’t look away.

[PAUL, spoken]
That’s true, but there’s more than that

[SARAH, spoken]
Is that all you think there is to it?

[HARRY, spoken]
You’ve got so many reasons for not being with someone, but Robert, you haven’t got one good reason for being alone

[DAVID, spoken]
You see what you look for, y’know?

[ROBERT]
Someone you have to let in
Someone whose feelings you spare
Someone who, like it or not
Will want you to share
A little, a lot…

[SUSAN, spoken]
And what does all that mean?

[LARRY, spoken]
Robert, how do you know so much about it when you’ve never been there?

[HARRY, spoken]
It’s much better living it than looking at it, Robert

[ROBERT]
Somebody hold me too close
Somebody hurt me too deep
Somebody sit in my chair
And ruin my sleep
And make me aware
Of being alive, being alive

Somebody need me too much
Somebody know me too well
Somebody pull me up short
And put me through hell
And give me support
For being alive
Make me alive, make me alive

Make me confused, mock me with praise
Let me be used, vary my days
But alone is alone, not alive!