The Jackson Browne album people know best, and the one that has sold more than any other by far, is the one least representative of his overall output.

1977’s Running on Empty, Browne’s fifth release, is a concept record about life on the road, with all of its tracks recorded during live shows or in hotel rooms, buses or backstage. Browne has solo writing credits on only two songs (the two best, as it turns out) and four are covers. The mood and style of this album is a long way from the cerebral folk rock of his earlier releases.

END_OF_DOCUMENT_TOKEN_TO_BE_REPLACED

When the Random iTunes Fairy first served up ‘Shaky Town,’ from Jackson Browne’s 1977 classic Running On Empty, I had no idea what it was. I figured it was a track on that album that I’d somehow always skipped, because the title seemed completely new to me.

Once the first verse started, though, I knew it very well. Guess I just never looked at the tracklist.

END_OF_DOCUMENT_TOKEN_TO_BE_REPLACED 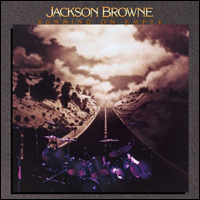 An interesting sub-genre is the album of new material that’s recorded live. Joe Jackson’s Big World is an example, as well as Stew’s The Naked Dutch Painter and Other Songs. These recordings lend an intimacy to the material that can be diminished in the studio.

The best example of this sort of album that I know of is Jackson Browne’s Running On Empty. This is an album about life as a musician recorded in a way that puts you in that musician’s shoes. It’s a beautiful marriage of form and content.

END_OF_DOCUMENT_TOKEN_TO_BE_REPLACED

Somewhere Dana is bursting with excitement as Jackson Browne finally finds a spot in the Song of the Day series. And before song number 800, no less!

I scanned my iTunes collection recently to see which big names had yet to be featured on the blog and was intrigued to find five who all fit a similar mold, demographically if not musically. This week I’ll highlight the music of five white guys in their 60s (actually, I believe one is in his mid-50s).

Apparently I’m musically biased against the segment of the population that runs just about everything else.