The last Album of the Year nominee I’ll mention is Post Malone’s Hollywood’s Bleeding. This is Malone’s second straight nod in this category, after 2019’s Beerbongs & Bentleys. I guess the Recording Academy has a soft spot for auto-tuned hip-hop inflected pop songs.

I like Malone well enough based on his media appearances, and a few of his songs have worked for me (specifically, ‘Rockstar‘ and ‘Circles‘). But a quick dive into this album didn’t impress me. It’s a lot of the same mid-tempo, moody pop you find in ‘Circles,’ but with less success.

END_OF_DOCUMENT_TOKEN_TO_BE_REPLACED 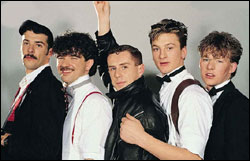 1984’s ‘Relax’ by Frankie Goes to Hollywood has to be the dirtiest record to ever get non-stop popular airplay. It’s certainly the gayest. In fact, the video for this song (embedded below) was banned by both the BBC and MTV due to its mature content. Compared to the stuff MTV plays today (when it actually plays music videos) this is pretty tame, but I wonder if the gay themes would still get it into hot water even today.

It wasn’t just the video for ‘Relax’ that was banned by the BBC. The song itself was blacklisted after a DJ took a little time to actually read the lyrics. As always, the ban just made the song more popular and it rocketed to #1 on the charts as people rushed out to buy what they were told they shouldn’t listen to.