This is an odd pick because it breaks the pattern I’ve set up through the other 19 songs. While The Police were very much an early-80’s band, Sting went on to have a celebrated solo career, making him one of the only artists on the list who had more success outside the 80’s than in them.

So an argument could be made that this isn’t really an ’80’s song’ so much as a Sting song (the same argument I’ve used in excluding artists such as Michael Jackson, R.E.M. and U2 from the lineup).

END_OF_DOCUMENT_TOKEN_TO_BE_REPLACED

You didn’t think I’d make it through this whole list without a Journey song, did you?

This spot could have been filled with any number of songs by Steve Perry and the boys — ‘Who’s Crying Now,’ ‘Stone in Love,’ ‘Open Arms,’ ‘Separate Ways,’ ‘Send Her My Love,’ just pick one. I’m going with ‘Don’t Stop Believin” because it’s the iconic Journey song, and also because its brand of muscular rock optimism really encapsulates the music of the 80s.

END_OF_DOCUMENT_TOKEN_TO_BE_REPLACED 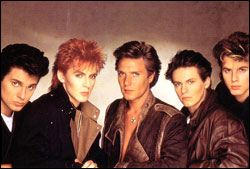 Duran Duran is one of the most successful and best-loved bands on this list, and one of the artists I wish I’d been more into at the time. I find myself really enjoying their songs now when I happen upon them and I wonder how it is they slipped past my radar back in the early to mid-80s. I suppose I can blame that on my sister, Amy, through whom I was exposed to most music back then (funny how it works the other way now).

END_OF_DOCUMENT_TOKEN_TO_BE_REPLACED

It’s hard to imagine an Avril Lavigne without Joan Jett. Or a Gwen Stefani, Shirley Manson or Courtney Love. Jett, Chrissie Hynde, Pat Benatar and Debbie Harry are the names that come to mind when I think of women who were pioneers of rock. But Jett is the one I consider most fondly, because I have great associations with this song, her biggest hit.

The allmusic biography of Jett lists 17 contemporary acts she has influenced. Almost every one is a woman. The same article lists 21 artists who influenced Jett, and every one is a man. Funny how you can look at two lists like that and see in an instant what it means to be a trailblazer.

END_OF_DOCUMENT_TOKEN_TO_BE_REPLACED

Unlike many of the bands on this list, I’ve never felt the need to better know the Eurythmics. Their brand of avant garde techno music is not my cup of tea, and I’m quite happy to know them only through their singles.

Now Annie Lennox as a solo artist is another story. Her covers album Medusa is a real treasure. The woman has a set of pipes, and an other-worldy timbre to her voice that fits her androgy-alien looks to a T. If they ever make a movie of her life, the smart money is on Tilda Swinton in the lead.