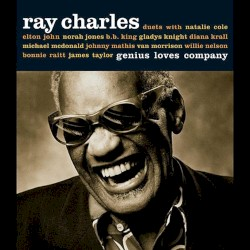 I ordered this week’s posts randomly, so imagine my surprise when the first voice I heard when firing up Ray Charles’ Genius Loves Company was that of Norah Jones, yesterday’s featured artist.

Jones is one of 12 artists with whom Charles teamed up for this collection of duets, the last album he would record before his death in June of 2004. The album was released posthumously two months later, becoming Charles’ first #1 record in 42 years.

END_OF_DOCUMENT_TOKEN_TO_BE_REPLACED

Both Amy and Dana included Bonnie Raitt’s recording of the John Prine classic ‘Angel From Montgomery’ on their list of favorite songs. This is a stone-cold classic, no doubt.

This track appeared on Raitt’s 1974 album Streetlights, her fourth release. She was pressured by her label to work with an established producer who could give her work more of a mainstream pop sheen, as opposed to the raw blues sound of her first few albums. She agreed, but wasn’t happy about it, and the album was a critical and commercial failure.

END_OF_DOCUMENT_TOKEN_TO_BE_REPLACED

My #6 album of 1991 is the female counterpart to yesterday’s selection of Marc Cohn’s debut album. As with that record, I haven’t spent a lot of time listening to Bonnie Raitt’s Luck of the Draw over the years, but there’s no denying its greatness.

Raitt has such a great voice and sound that you can listen to her singing anything and come away satisfied. One of my co-workers tunes her Alexa to the Bonnie Raitt station every time it rains, and I totally get why.

END_OF_DOCUMENT_TOKEN_TO_BE_REPLACED

I love the idea of Bonnie Raitt, but I’ve never taken the time to listen to much of her music. If somebody asked me what I think of her, I’d say “Oh, Bonnie Raitt, she’s wonderful” but I’d be basing that on maybe three or four songs. Maybe the rest of her catalog is white power heavy metal, but I’m sure I would have heard something about that by now.

1991’s Luck of the Draw is Raitt’s biggest hit, going seven times platinum in the U.S. I own this record (hence its appearance on Random iTunes Weekend) but I’ve probably listened to it all the way through only a couple of times. Still, by my “three great songs make a great album” theory, this one fits the bill. END_OF_DOCUMENT_TOKEN_TO_BE_REPLACED