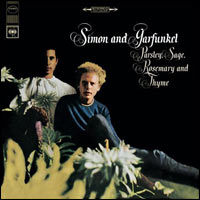 Today’s song, ‘Cloudy,’ was co-written by Simon and Bruce Woodley of the Australian folk quarter The Seekers. They recorded their own version of the track a year later. Woodley and Simon wrote three songs together, including ‘Red Rubber Ball,’ a #2 hit for American rock band The Cyrkle.

Simon and Woodley had a falling out over songwriting royalties, exacerbated by the fact that Woodley’s writing credit was omitted from ‘Cloudy’ on Parsley, Sage, Rosemary and Thyme.

[Verse 2]
Cloudy
My thoughts are scattered and they’re cloudy
They have no borders, no boundaries
They echo and they swell
From Tolstoy to Tinker Bell
Down from Berkeley to Carmel
Got some pictures in my pocket and a lot of time to kill

[Verse 3]
Hey, sunshine
I haven’t seen you in a long time
Why don’t you show your face and bend my mind?
These clouds stick to the sky
Like a floating question, why?
And they linger there to die
They don’t know where they are going, and, my friend, neither do I