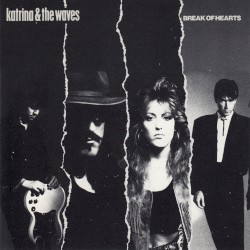 My final one-hit wonder is a band that probably doesn’t deserve the designation. Yes, Katrina and the Waves are known first and foremost for ‘Walking on Sunshine,’ but their catalog boasts a few other songs that can legitimately be described as hits.

But the track I’m featuring today appeared on the band’s 1989 album Break of Hearts, and is the only song other than ‘Sunshine’ to reach the Billboard top 20 in the United States.

‘That’s the Way’ is another buoyant pop song, reminiscent of but nowhere near as catchy as ‘Walking on Sunshine.’ I wonder if any of my readers will remember it.

Strolling when we walk
Whisper when we talk

Deep down devotion
That’s our love in slow motion

Lighten up and lay your rocket down