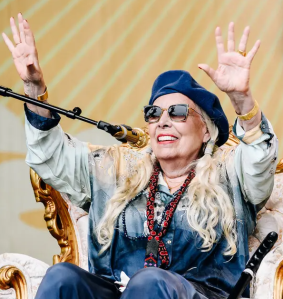 ‘Both Sides Now’ would have made a perfect closing song for Mitchell’s set, but she decided to end with another of her wistful hits, ‘The Circle Game.’ Accompanied by both her fellow musicians and the crowd, Mitchell sang her ode to the fleeting beauty of childhood.

These lyrics from the chorus are particularly poignant coming from the 78-year-old legend: “We’re captive on the carousel of time / We can’t return, we can only look behind, from where we came.”

Whether the Newport set was the swan song of an extraordinary career or the beginning of a new phase, it is one of those special musical performances that will be written about and watched for many years to come.