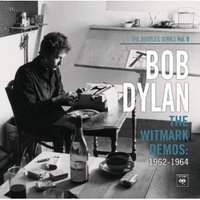 Today’s track is the fourth Random Weekend selection from Bob Dylan’s Whitmark demos, a collection of songs recorded in the early 60s to shop around to other performers.

This one is well-timed, coming on the heels of the news that Dylan has sold the songwriting rights of his entire catalog to the Universal Music Publishing Group for a sum reportedly north of $300 million. It is likely the largest deal of its kind ever made.

Imagine telling the 22-year-old kid recording this tender ballad in the hopes of making a few bucks that he would eventually sell his life’s work for a third of a billion dollars.

You will search, babe
At any cost
But how long, babe
Can you search for what is not lost?
Everybody will help you
Some people are very kind
But if I can save you anytime
Come on give it to me
I’ll keep it with mine.

I can’t help it
If you might think I’m odd
If you say I’m lovin you not for what you are
But what you’re not
Everybody will help you
Discover what you set out to find
But if I can save you anytime
Come on give it to me
I’ll keep it with mine.

The train leaves
At half past ten
But it will be back
In the same old spot again.
The conductor he’s weary
He’s still stuck on the line
But if I can save anytime
Come on give it to me
I’ll keep it with mine.