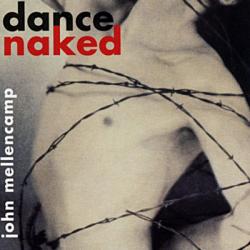 John Mellencamp released my favorite of his albums, Human Wheels, in 1983. Despite that record’s excellence, his label was reportedly unhappy with the result because it didn’t “fit the format.”

In response, Mellencamp delivered a follow-up album that he recorded in just two weeks, with few instruments and little attention to the production. You want the format, he was saying, I’ll give you the format. That album was 1984’s Dance Naked.

As it turns out, the format makes for a pretty good, if forgettable, album.

Dance Naked spawned an unexpected hit with a cover of Van Morrison’s ‘Wild Life,’ performed as a duet with Me’shell Ndegeocello. The rest of the album has the laid-back charm Mellencamp brings to most of his music.

Today’s Random Weekend selection is a reminder I should listen to him more than I do.

Let’s get to the point now
Just because we’ve got the same mom and dad
That don’t mean I’m your keeper
That don’t mean I owe anything to you
You don’t care for me
And man, I don’t think that much of you