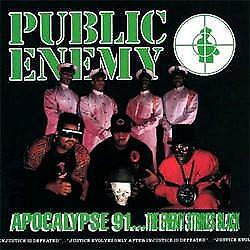 This is the year I turned 19, and a time when I was actively buying new music. It was also a very strong year for album releases in general. So I will spend more time than usual on 1991 releases — three weeks on my own favorites from the year and another two or three weeks on critically acclaimed albums I don’t know well.

I’ll start with five albums outside of my personal top ten from the year but still worth a mention.

Kicking things off is the appropriately titled Apocalypse 91… The Enemy Strikes Black, the fourth studio album by rap pioneers Public Enemy. This was my first Public Enemy album, and possibly the first rap album I ever owned.

Listening to today’s track, a screed against Arizona governor Evan Mecham’s cancellation of the state’s Martin Luther King, Jr., holiday, has me wishing that more of today’s rap acts would tackle hot-button political issues. Now that rap and hip-hop are the dominant musical genre, it seems every other song is about drugs, money or the objectification of women.

Chuck D rapped about racial injustice, giving voice to a movement that was barely recognized in the suburbs and beyond. We’re much more socially aware now, but the music has taken a step backward.

[Intro: Sister Souljah]
This is Sister Souljah
Public Enemy, Security of the First World, and all allied forces
Are traveling west to head off a white suprema-scheming
To destroy the national celebration of Martin Luther King’s birthday
Public Enemy believes that the powers that be in the states of New Hampshire and Arizona have found psychological discomfort in paying tribute to a black man who tried to teach white people the meaning of civilization.
Good luck brothers, show ’em what you got

[Verse 1]
I’m counting down to the day deserving fitting for a king
I’m waiting for the time when I can get to Arizona
Cause my money is spent for the goddamn rent
Neither party is mine, not the jackass or the elephant
20,000 niggy niggy brothers in the corner
Of the cell block but they come from California
Population is none in the desert and sun
With a gun cracker running things under his thumb
Staring hard at the postcards, isn’t it odd and unique
Seeing people smile wild in the heat?
120 degrees, cause I want to be free
What’s a smiling face when the whole state’s racist?
Why I want a holiday? Damn it, cause I wanna
So what if I celebrate it standing on a corner
I ain’t drinking no 40, thinking time with a nine
‘Til we get some land, call me the trigger man
Looking for the governor, huh? He ain’t lovin’ ya, ha?
But here to trouble ya, he’s rubbin’ ya wrong
Get the point and come along, and he can get to the joint
I urinated on the state while I was kicking this song
Yeah, he appear to be fair
The sucker over there, he try to keep it yesteryear
The good ol’ days, the same ol’ ways that kept us dyin’
Yes: you, me, myself, and I indeed
What he need is a nosebleed
Read between the lines, and then you see the lie
Politically planned… But understand, that’s all she wrote
When we see the real side that hide behind the vote
And they can’t understand why he the man
I’m singin’ ’bout a KING
They don’t like it when I decide to mic it
Wait, I’m waitin’ for the date
For the man, who demands respect
Cause he was great, C’mon
I’m on the one mission to get a politician to honor
Or he’s a goner by the time I get to Arizona

[Verse 2]
Well, I got 25 days to do it
If a wall in the way, just watch me go through it
Cause I gotta do what I gotta do
P.E. number one, gets the job done
When it’s done and over, was because I drove’er
Through all the static, not stick but automatic
That’s the way it is, he gotta get his
Talking MLK, gonna find a way
Make the state pay, I’m looking for the day
Hard as it seems, this ain’t no damn dream
Gotta know what I mean, it’s team against team
Catch the light beam

So I pray, I pray every day, I do and praise Jah the maker
Looking for culture I got, but not here from Jamaica
Pushing and shaking the structure, bringing down the Babylon
Hearing the sucker that make it hard for the Brown
The hard Boulovard I need it now more than ever now
Who’s sitting on my freedom, opressor, people beater
A piece of the pick, we picked a piece of land that we’re deserving now
Reparation a piece of the nation, and, damn, he got the nerve
Another nigga they say and classify we want too much
My people plus the whole nine is mine, don’t think I even double dutch
Here’s a brother my attitude is hit ’em, hang them high
I’m blowing up the 90’s, started ticking in ’86
When the blind get a mind, better start fearing while we sing it
Now, there will be the day we know those down and who will go

By the time I get to Arizona