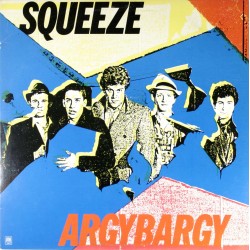 So many of the albums I write about in these year-by-year series elicit in me the same response: I really need to listen to this one. Such is the case yet again with today’s selection, Squeeze’s third album, Argybargy.

Considering how much I love Squeeze’s 1981 classic East Side Story, along with the greatest hits collection I wore out in college, it’s a mystery why I haven’t listened to any of the dozen or so other albums they’ve released. Glenn Tilbrook and Chris Difford are one of the great pop songwriting duos, a pair dubbed the next Lennon and McCartney by some of their English countrymen.

The first two tracks of Argybargy, ‘Pulling Mussels (From the Shell)’ and ‘Another Nail For My Heart,’ are favorites of mine from that best-of album, and a quick sampling of the rest reveals more of the same smart pop sensibility that makes them so great.

AllMusic ranks this album and East Side Story as the band’s best work, so even if I will never explore the full breadth of Squeeze’s output it seems Argybargy should be my next stop.

[Chorus]
But behind the chalet
My holiday’s complete
And I feel like William Tell
Maid Marian on her, tiptoed feet
Pulling mussels from a shell
Pulling mussels from a shell
[Verse]
Shrinking in the sea so cold
Topless ladies look away
A he-man in a sudden shower
Shelters from the rain
You wish you had a motor boat
To pose around the harbour bar
And when the sun goes off to bed
You hook it up behind the car