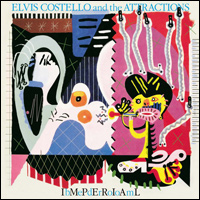 Elvis Costello’s many reissues of his back catalog have unearthed a lot of excellent tracks. Today’s Random iTunes selection is not among them.

This alternate take of Imperial Bedroom‘s ‘Little Savage’ is nearly incoherent, especially vocally, a fact that Costello himself acknowledges in the disc’s liner notes:

After the band sessions were concluded, I worked alone for several weeks, experimenting with odd overdubs and vocal approaches. It is possible that I lost as much as I gained. The raw and borrowed style of the “Tears Before Bedtime” take on CD 2 might well be a little closer to the truth.

The most disguised of these songs is “Little Savage”; one of several cuts rehearsed and even recorded in different tempo and time signatures. The slower pace of the album demanded the up-tempo arrangement to be included, but the meaning of the song would have been better served by the approach of the unfinished version found on CD 2, even though the vocalist seems to be trying to escape the confines of the harmony.

Chorus:
You do something very special to Mr. Average
Now the lamb lies with the lion
He’s just a little savage