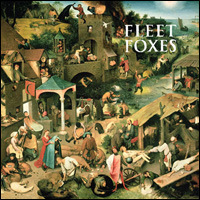 The Random iTunes Fairy is aiming for a theme weekend, it seems. As with Nellie McKay, yesterday’s selection, Fleet Foxes are a band I abandoned years ago only to second-guess my decision.

The difference is that McKay has continued to record in the ensuing decade, while Fleet Foxes released one more album and have since unofficially split.

Fleet Foxes received a ton of critical acclaim during the same indie folk explosion that produced Mumford & Sons. This debut album topped many a critics list, but I could never get past its sleepiness to really learn it.

Today’s random track is lovely, though, and makes me wonder if I heard the album at the wrong moment in my life, or even in my day. Sometimes it’s all about the timing.

Whoa-oh-oh
Come down from the mountain, you have been gone too long
The spring is upon us, follow my only song
Settle down with me by the fire of my yearning
You should come back home, back on your own now

The world is alive now, in and outside our home
You run through the forest, settle before the sun
Darling, I can barely remember you beside me
You should come back home, back on your own now

In the evening light, when the woman of the woods came by
To give to you the word of the old man
In the morning tide when the sparrow and the seagull fly
And Johnathan and Evelyn get tired

Lie to me if you will at the top of Beringer Hill
Tell me anything you want, any old lie will do
Call me back to you