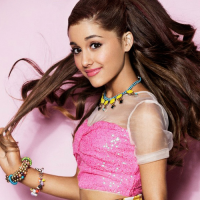 Next week I’m going to launch the next installment of my “keeping up with what the kids are listening to” series, in which I feature songs currently topping Billboard’s Hot 100.

I suspect I might be jumping the gun by posting Ariana Grande’s ‘Problem’ today. I don’t know where it sits on that chart (and I won’t cheat and look now) but based on the growing buzz, I’m guessing it’s pretty high.

I know Grande best as Kat from Nickelodeon’s Victorious but over the past year she has returned to her real love, singing, and staked her claim as the heir apparent to Mariah Carey.

‘Problem’ is the best evidence yet that she’s going to have no problem sticking the landing. It’s a brilliant pop song, courtesy of Max Martin, the man behind seemingly every hit of the past decade.

Between the juicy sax riff, the whispered chorus and Grande’s trilling verses, this thing is pure ear candy and the early favorite for ‘Song of the Summer’ status.

[Intro: Iggy Azalea]
Uh-huh! It’s Iggy Iggs!
I got one more problem with you girl, hey!
(One less one less problem)

[Pre-Hook: Ariana Grande]
Head in the clouds, got no weight on my shoulders
I should be wiser, and realize that I’ve got

[Verse 2: Ariana Grande]
I know you’re never gonna wake up
I gotta give up, but it’s you?
I know I shouldn’t ever call back
Or let you come back, but it’s you
Every time you touch me
And say you love me
I get a little bit breathless
I shouldn’t want it, but it’s you

[Verse 3: Iggy Azalea]
Smart money bettin’ I’ll be better off without you
In no time I’ll be forgettin’ all about you
You sayin’ that you know, but I really, really doubt you
Understand my life is easy when I ain’t around you
Iggy Iggy, too biggie to be here stressin’
I’m thinkin’ I love the thought of you more than I love your presence
And the best thing now is probably for you to exit
I let you go, let you back, I finally learned my lesson
No half-steppin’, either you want it or you just playin’
I’m listenin’ to you knowin’ I can’t believe what you’re sayin’
There’s a million you’s baby boy, so don’t be dumb
I got 99 problems but you won’t be one
Like what