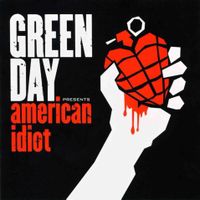 I’m surprised to see that I’ve never featured a Green Day song through 1,555 Songs of the Day.

Not that I’m a big Green Day fan. I’m decidedly not. In fact, I dislike most of their music.

But I love American Idiot, their 2004 rock opera (which has since become a Broadway musical). And you’d think during more than four years of daily songs I’d have gotten around to it.

American Idiot is sometimes as grungy and loud as Green Day’s typical output, but at other times it is emotional, melodic, even poetic. And it’s an effective concept album, spinning a compelling tale of love and rage among disenchanted millenials.

Mostly I love the band’s brazen ambition on this record, most apparent on the two 9-minute multi-song suites that show up near the album’s opening and close. This is the sort of thing Pink Floyd and The Who pulled off on a regular basis in the 70s and it’s neat to see it done in the age of iTunes.

I walk alone, I walk a

I walk this empty street
On the boulevard of broken dreams
Where the city sleeps
And I’m the only one, and I walk a