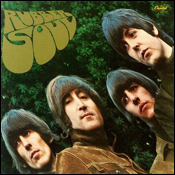 For this week’s theme, I will continue the Beatles album-by-album song selection I started a month ago. I’ll pick up where I left off, starting with the band’s fifth album, Rubber Soul, and continue through their final album, Abbey Road, which will be the focus on Sunday. I will dedicate two days to the double-sided self-titled album (popularly referred to as The White Album).

And what better way to start than with ‘In My Life,’ a leading candidate for Best Beatles Song Ever and, for that matter, Best Song Ever. This is one of the simplest yet most profound songs I know.

I think a lot of its appeal boils down to those famous first six notes. I wonder what it must have been like for John to noodle around on a piano or guitar and stumble upon that combination of sounds. Did he know he had a classic on his hands right off the bat? But then, I suppose these guys had that feeling all the time.

This is one of the songs I sang to both my daughters before bed for years (the other was also by The Beatles, ‘Blackbird’) I like that the lyrics can apply to romantic love as well as the love for a child.

There are places I’ll remember all my life
Though some have changed
Some forever, not for better
Some have gone and some remain
All these places have their moments
With lovers and friends I still can recall
Some are dead and some are living
In my life I’ve loved them all