I’m bypassing a few of The Supremes’ other #1 hits — specifically, ‘Love is Here and Now You’re Gone,’ ‘Come See About Me’ and ‘The Happening’ — and finishing off the Motown series with today’s song, their final #1 single.

This is my 28th Motown song — 3 1/2 months’ worth. I hope you’ve enjoyed the exploration of some of the finest music America has ever produced. I know I have. I do like the idea of keeping a theme on the weekends, and I think I know what I’ll try next. Stay tuned.

END_OF_DOCUMENT_TOKEN_TO_BE_REPLACED

Of all The Supremes’ #1 hits, this one strikes me as among the most interesting because of the way it reflects the changing dynamic in both the music industry and the band itself.

For one thing, note that the song is credited to Diana Ross & The Supremes, a name change that took place in 1967 and led to a growing rift within the group. Indeed, Florence Ballard left the band just a year later and was replaced by Cindy Birdsong. ‘Love Child’ was The Supremes’ first #1 single without Ballard, and the first under their new moniker.

END_OF_DOCUMENT_TOKEN_TO_BE_REPLACED 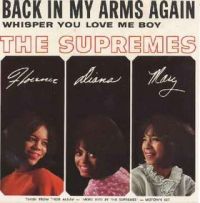 This 1965 ditty was the fifth Supremes song in a row to hit #1 on the Billboard chart. I don’t know it as well as the others (which included ‘Baby Love,’ ‘Where Did Our Love Go?’ and ‘Stop! In the Name of Love’) but it’s a good one.

Wilson, now 65, sang with The Supremes through all of the group’s incarnations and continues performing as a solo artist to this day. She is also one of the initiators of a bill that bans groups from performing under the names of famous bands.

END_OF_DOCUMENT_TOKEN_TO_BE_REPLACED

Hard to believe I’ve done a couple dozen Motown songs and a handful of Supremes songs and I’m only now getting around to this one.

I wonder if there’s another song so identified with a specific gesture (or dance move) as this one is with the outstretched arm/flat hand move the ladies did every time they performed it. ‘Walk Like an Egyptian?’ Although that was more the people in the video than The Bangles themselves. Perhaps the MC Hammer hand gesture that accompanied ‘2 Legit 2 Quit?’ I jest.

END_OF_DOCUMENT_TOKEN_TO_BE_REPLACED

It’s fitting that ‘You Can’t Hurry Love’ makes an appearance in the middle of my 80s countdown, as my first experience of the song came through Phil Collins’ 1982 cover version. I was vaguely aware that the tune wasn’t his, but I didn’t know the classic Supremes’ version at all.

It’s funny how many of these old Motown songs (particularly Supremes songs) were covered in the 80s. I think cover versions were to that era what sampling is to the 90s and 00s. These days you don’t see many artists straight up covering old songs, but you hear plenty of beats and melodies of old songs showing up piecemeal in new ones.

END_OF_DOCUMENT_TOKEN_TO_BE_REPLACED

I know Wikipedia gets a bad rap, but I love it. It’s definitely been a valuable resource when compiling a lot of these Song of the Day posts, especially the Motown ones. The wealth of information about Billboard charts, authorship and behind-the-scenes drama (all meticulously footnoted) is extraordinary.

For instance, the entry on the 1965 Supremes hit ‘I Hear a Symphony’ details how the band had hit a slump (comparatively speaking) when their previous release, ‘Nothing But Heartaches,’ peaked at #11 on the Billboard charts. This upset Motown guru Berry Gordy and prompted him to write the following memo:

END_OF_DOCUMENT_TOKEN_TO_BE_REPLACED 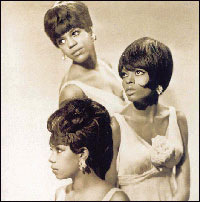 I’ve been pulling these Motown Weekend titles from a Web site listing the ‘100 Greatest Motown Songs.’ I don’t necessarily agree with their order but the top 25 has provided me fodder for nearly 3 months worth of fabulous hit songs from the golden era.

I’m less excited, though, by the songs lower on the list. So rather than highlighting those lesser efforts, I’m going to finish out the Motown series by focusing on the #1 singles of The Supremes. I’ve already featured ‘Where Did Our Love Go‘ and ‘Baby Love‘ but they had… wait for it… TEN more #1 singles in their career.