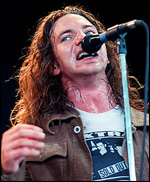 From Pearl Jam I make the rather simple leap to an Eddie Vedder solo performance. In October of 1992, a stellar lineup of artists gathered at Madison Square Garden to pay tribute to a living legend at The Bob Dylan 30th Anniversary Celebration.

Of course, Dylan has gone on to record four studio albums since then, including three that number among his very finest work, so maybe this celebration was a bit premature. But I guess it’s never too early to tip your hat to genius. I wonder what they’ll cook up for the 50th anniversary celebration three years from now.

END_OF_DOCUMENT_TOKEN_TO_BE_REPLACED 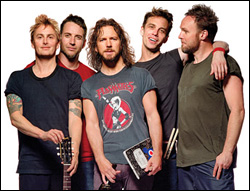 Over the next eight days, I’m going to present songs in a sort of ‘Six Degrees of Separation’ format. While I was looking up clips on YouTube, I made some jumps from one to another based on random criteria and figured I might as well hold on to that process as I posted them.