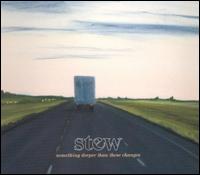 ‘L.A. Arteest Cafe’ is the final song (not counting several hidden bonus tracks) on Stew’s 2003 album Something Deeper Than These Changes. It’s a quirky, playful tune about an ill-fated trip to Los Angeles.

After a trio of winning solo albums and another few with his project The Negro Problem, Stew kind of fell of the map, at least in terms of album releases. He focused on his theater work, and found success with Passing Strange, which hit Broadway in 2008 and was captured on film by Spike Lee a year later.