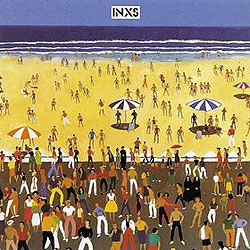 Like yesterday’s SOTD, today’s track comes from the 1980 debut album of a popular rock band with a brash, charismatic lead singer. Only these lads come to us all the way from Australia.

INXS’ self-titled debut doesn’t sound at all like the music that would make them famous. Five years before Listen Like Thieves and seven years before Kick, they were searching for an identity, mixing up New Wave and post-punk into an unremarkable stew.