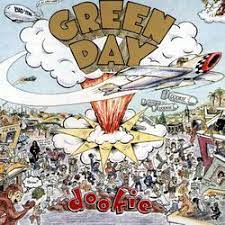 When I do these Decades series, I’m always surprised by how many copies albums sold two or three decades ago. Most of the albums I’m featuring as part of this look at 1994 went at least three or four times platinum. A few made it to diamond status (10 million units).

Among those is Green Day’s Dookie, the band’s third album and first for a major label. The album went diamond in the U.S. and sold 20 million copies worldwide, making it their top-selling album by far (eclipsing 2001’s American Idiot by several million).

Dookie finds Green Day in the sweet spot between the more aggressive punk rock on their first two albums and the ambitious rock opera format they would adopt for later releases. While the more radio-friendly sound caused some fans to dismiss them as sellouts, the approach clearly paid off.

I was familiar with the album’s singles (‘Longview,’ ‘Welcome to Paradise,’ ‘Basket Case,’ and ‘When I Come Around’) but hadn’t heard the rest before now. This is another album that just missed my radar in my 20s.

I found myself liking Dookie a lot more than I expected. While it certainly finds time to thrash, it’s a well-crafted pop-rock album with disarmingly insightful lyrics and plenty of hummable tunes.

At 15 tracks, it wears out its welcome before reaching the finish line, but it’s definitely a fun listen.

[Verse 1]
Well, I heard you crying loud
All the way across town
You’ve been searching for that someone and it’s me out on the prowl
As you sit around feeling sorry for yourself
Well, don’t get lonely now
And dry your whining eyes
I’m just roamin’ for the moment, sleazin’ my backyard, so don’t get
So uptight, you’ve been thinking about ditching me

[Verse 2]
Oh, I heard it all before
So don’t knock down my door
I’m a loser and a user, so I don’t need no accuser
To try and slag me down because I know you’re right
So go do what you like
Make sure you do it wise
You may find out that your self-doubt means nothing was ever there
You can’t go forcing something if it’s just not right