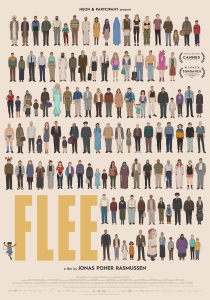 The Danish film Flee made history a few weeks back when it became the first movie ever nominated for Best Documentary, Best International Feature, and Best Animated Feature. It’s as unique and fascinating as that intersection of qualities suggests.

I will have more to say about Flee when I get to my top ten list, but for now I want to highlight one of my favorite scenes from the film and another of my favorite musical moments from last year.

Flee tells the story of Amin Nawabi, a man who fled authoritarianism in Afghanistan and Russia as a child before settling in Denmark. His recollections have been captured by filmmaker Jonas Poher Rasmussen, who befriended Amin as a teenager 20 years ago and has always longed to know his story.

The use of animation allowed Rasmussen to provide anonymity to the very private Nawahi (a pseudonym), and to recreate scenes from his past without using live-action recreations.

The scene I love comes late in the film, and I hesitate to spoil it because Flee was only recently released on Hulu. I urge anybody reading this to check it out if possible.

I’ll just say that, in addition to the many political troubles Amin escaped, he faced the additional obstacle of being a young gay man in a culture not known for its open-mindedness about sexuality.

Today’s song, ‘Verdi’s Quo’ by Daft Punk, plays during a sequence where Amin comes out to some family members. I won’t reveal how the situation plays out, but I was floored by both the events depicted and the sensitivity and skill with which it was done.

[Note: The video below is not from the movie… it’s Daft Punk’s music video for the song. I couldn’t find a clip of the scene online.]