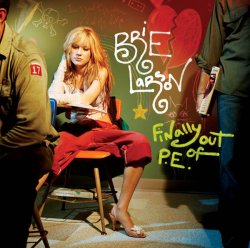 Ten years before she won a Best Actress Oscar for Room and 14 years before she joined the Marvel Cinematic Universe as one the most powerful Avengers, Captain Marvel, Brie Larson was a 16-year-old wannabe pop singer in the Avril Lavigne mold.

Larson’s one and only album, Finally Out of P.E., is a collection of generic pop songs about the trials of a 21st century high school student. It isn’t any good, but it’s charming in hindsight, given the trajectory Larson’s career took over the following decade.

Setting aside this forgettable collection, Larson’s finest musical moment is no doubt her appearance in 2010’s Scott Pilgrim vs. the World, where her character, Scott’s ex-girlfriend Envy Adams, performs a sexy rendition of ‘Black Sheep.’

[Verse 1:]
I’m late again
Got a lower grade today than yesterday
You hate me
That’s why you don’t care what I have to say

[Chorus:]
I, I play guitar
But in your class
That won’t get me far
Please, give me a “C”
So that I can be
Finally out of P.E

[Verse 2:]
I’m never gonna win a medal
But maybe a Grammy
You don’t care
You just wanna make sure that you fail me

[Bridge:]
You may think I’m just a troublemaker
But I have talent
You can’t see

Just because I’m not athletic
Doesn’t mean that you can degrade me
I show up
Shouldn’t that be enough?