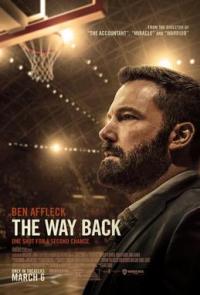 Ordinarily, by now I’d be posting my favorite movies of the year and writing about Oscar predictions. But 2020 was no ordinary year, for movies or anything else.

The Oscars were pushed back to April, and as a result plenty of “2020” films have yet to be released anywhere I can see them. So my official list will have to wait awhile.

In the meantime, I’ll spend this week writing about a few different aspects of my moviegoing in 2020.

“Moviegoing” is the wrong word, because I spent a lot more time staying in than going anywhere. I watched a total of six movies in theaters last year, which must be my lowest annual total since I was in diapers.

Those movies were 1917, Bad Boys For Life, Birds of Prey, The Invisible Man, Onward, and The Way Back. The Way Back has the honor of being the last film I saw in a movie theater, and a song from that movie is today’s SOTD.

My wife and I saw The Way Back on March 7, as part of an anniversary weekend that also included a live concert by the wonderful Brandi Carlile. Carlile referenced the virus, and acknowledged that concerts might not be a thing for much longer. 444 cases had been confirmed in the United States.

While I didn’t get to theaters much, that didn’t stop me from seeing a whole lot of movies. In fact, I might have set a personal record.

Quarantine kept my daughter home for her freshman year of college, and it meant a resurgence of our weekly family movie nights (which stepped up to multiple times per week when school was out).

And I took advantage of the extra time to do deep dives into movie musicals and the films of Pixar and the Coen Brothers.

I’d call that finding the lemonade in the corona-lemon.

I sure hope at this time next year I’ll be writing about a traditional top ten list, most of which I saw in an actual movie theater with a tub of popcorn in hand. It might take a little while to get there, but I’m optimistic.