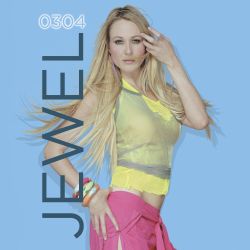 The earnest acoustic singer-songwriter’s abrupt move into dance-pop territory was greeted with suspicion and derision at the time. Jewel was called a sell-out who embarrassed herself by embracing her sexuality and exploring a musical genre so far outside her wheelhouse. But I kinda loved it.

Reading about this album today, I’m seeing a lot of critics who admire and defend it, and acknowledge that it was misunderstood and unfairly attacked.

Sometime in the mid to late 2000’s, the “poptimism” movement in music criticism took over, and artists such as Beyoncé and Taylor Swift were taken as seriously as the rock heroes of previous decades. The previous dismissal of “lightweight” pop music was exposed as snobbery, often rooted in sexism.

Indeed, much of the criticism hurled at Jewel for 0304 was obnoxiously misogynistic.

Had this album come out a decade later, would it have been received with open arms like, say, Swift’s left-turn pop release 1989?

[Verse 1]
I watch you while you’re sleeping
Messy hair, chest bare, moonlight on your skin
I wanna breathe you in
In the silence, words come easy
I can tell you now just how simple it’s been to let you in
Don’t move, this mood is a painting
We’ll never find the same thing

[Chorus]
Love, do not make a sound
Melt into me now
Two become one

[Chorus]
Love, do not make a sound
Melt into me now
Two become one
Love, let’s make time stand still
Let this moment last until
Two become one

[Bridge]
Like a bird owns its wings
Like song belongs to melody
You belong to me
I fold your arms around me
Let your flesh, your breath, your love surround me
Oh, you feel like home

[Chorus]
Love, do not make a sound
Melt into me now
Two become one
Love, let’s make time stand still
Let this moment last until
Two become one