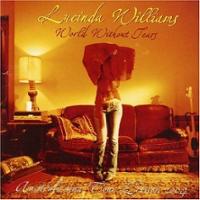 Lucinda Williams’ seventh studio album, World Without Tears, is my #8 album of 2003. This record was Williams’ follow-up to 2001’s plaintive Essence, and it finds her in a very different mood.

Much of World Without Tears is relentlessly bleak, touching on sexual abuse, drug addiction, domestic violence and historical atrocities. Fun!

Musically, it veers between haunting ballads and ripsnorting rockers, and Williams proves equally adept at both.

This is a tough album, but a rewarding one, the kind of record that gives shape and nuance to an extraordinary career moving into its fifth decade.