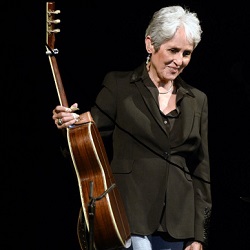 After a month of musicals, I’m turning my attention to good old-fashioned rock-n-roll, taking a look at a recent class of inductees to the Rock & Roll Hall of Fame.

Our first inductee isn’t much of a rocker. But Joan Baez’s contributions to folk music, and folk music’s contribution to rock, make her an important figure in the lineage of rock-n-roll.

Baez was instrumental in the emergence of Bob Dylan as a musical powerhouse, giving him access to her audiences and entering into a love affair with him that spanned some of the greatest albums either would release.

She is a lifelong activist who performed at the 1963 March on Washington and marched from Selma to Montgomery in 1965. In addition to her civil rights activism, she was a vocal opponent of the Vietnam War, has been a lifelong member of Amnesty International, and is a strong proponent of LGBT rights. What a badass.

Baez has released 31 albums between 1959 and 2018. Her early work consisted of traditional folks songs and covers of other artists (Bob Dylan, most often). In 1970, she began to record her own compositions and shift from political to personal songs.

Today’s song is the title track of the 1975 album Diamonds & Rust. It was written about a phone call between her and Dylan. On the same album, she covered his ‘Simple Twist of Fate’ and hilariously impersonated his voice on one verse.

Baez was first eligible for the Hall of Fame in 1986 but went unnominated until 2017, when she made it in.

As I remember your eyes
Were bluer than robin’s eggs
My poetry was lousy you said
Where are you calling from?
A booth in the midwest
Ten years ago
I bought you some cufflinks
You brought me something
We both know what memories can bring
They bring diamonds and rust