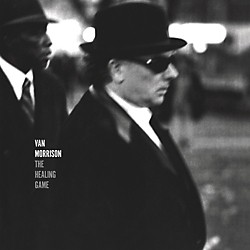 I’m surprised I’ve never featured a song from Van Morrison’s 1997 album, The Healing Game. Not because it’s a favorite of mine — I don’t think I’ve heard it all the way through since my initial listens — but because I have a clear memory of buying it.

On Wednesday, I recalled my then-girlfriend, Alex, and I buying two copies of Billy Joel’s River of Dreams because we didn’t yet live together. Well, today’s album is likely the first one Alex and I bought after getting married.

We were vacationing in San Francisco when Alex heard a song from this newly-released album and said she wanted to buy it. We found a record shop in town, picked it up, and it became part of the soundtrack of that trip.

You might think this was the first of countless albums we would go on to buy as a couple, but that’s not the case. Alex has an aversion to music stores that parallels my reaction to shopping for women’s clothes. So this memory stands out.

Surprisingly, this is only the second Van Morrison song I’ve featured that doesn’t come from the 1970 classic Moondance (the other was ‘Brown Eyed Girl‘). The man has released 41 albums.

Trials and tribulations and stupidity still rules
Sometimes it looks like I’m on a ship of fools
It once was my life, when my message was just the street

Then it became something else, and now it’s incomplete
I’m just trying to get back to when
Can somebody please shed some light
It used to be my life, it used to be uptight

I’m back here on the boards, I can hear the engines roar
Everybody’s got to pay, some people got to pay more
Well you can tell the people anything
Spoon feed them anything you like
It used to be so simple, it used to be my life

Now everything is so complicated, just to speak or use the phone
Some people try to use me, just ’cause they don’t have their own
Don’t know who’s round the corner, trying to sell me some more tripe
It used to be my life, it used to be my life…..