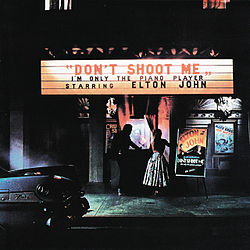 Keeping up his incredible pace in the early 70s, Elton John released his fifth album in four years with 1973’s Don’t Shoot Me, I’m Only the Piano Player. This record, like Honky Chateau before it, went to #1 in the U.S.

Opening track ‘Daniel’ is the standout on this one, and it made my playlist alongside the playful, nostalgic ‘Crocodile Rock’ (shout out to the excellent use of that song in Rocketman). But two songs new to me also made the cut.

The first is ‘Midnight Creeper,’ a grungier take on the ‘Honky Cat’ sound that John reportedly wrote as a nod to the Rolling Stones. I loved this one instantly.

[Verse 2]
Long haired ladies well they look so fine
Locked in my cellar full of cheap red wine
But, I don’t think those ladies they really mind honey
I still don’t know why you hate me so
A little bit of fun never stopped no show
Well I just want to loosen up my soul honey