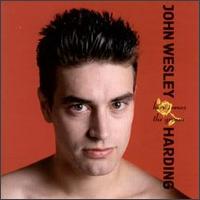 This is the year I turned 18 and started college, a time when I started expanding my musical horizons, and yet I had a hard time coming up with albums I really like from the year. I found a lot more that I missed out on, and I’ll cover those over the next couple of weeks, but this week I’ll count down my five favorite 1990 albums.

1990 was such a weak year for me musically that my #5 album is one I don’t even know all that well.

I bought John Wesley Harding’s Here Comes the Groom because I’d read comparisons to Elvis Costello, and it certainly does deliver on that front. This is a record I always enjoy when I play it, but I play it about once every five years.

This was Harding’s first full-length studio album and, though he is still recording, remains his best-known work.

With half an eye on history
And half an ounce of hope
Sold his soul in the vestry
Money for old rope
Been this way a million times
But now his time is nigh
He steps into the spotlight
He wants to say ‘hi
Hello, we’re so glad you came
You’ve never seen me before’
He’s so ambitious, he’s so game
But yesterday he was dressed the same
Then he was so much easier to ignore
Here Comes The Groom
But the world’s not an inn and there isn’t any room for you
But here he comes

He married into money
Just to kiss and tell
He ripped the contract open
He’s out of his shell
He looks into a mirror
Practising his poise
But it reflects so badly
The groom just gets annoyed
He gasps, he forgets his lines
He’s never done that before
The scientists say he’s doing fine
This fumbling frantic frankenstein
Soon he’s gonna do the dinosaur
Here Comes The Groom

His fingers are on the cliff edge
His head is going under
Is that applause?
No that’s just thunder….
Why do you keep saying I do?
What does the bride mean to you?

Play me some Puccini
Make it heavy on the strings
Walk me to the altar
The choir can’t even sing
Right side for the photographs
Left side for the kids
God made me do it
So that’s what I did
He coughs, loosens his bow-tie
You’ve never seen him before
He kisses the bride, oh you know why
Love’s one more thing you can buy
He was unfaithful before he went outdoors
(and now he’s in the graveyard)
Here Comes The Groom…..