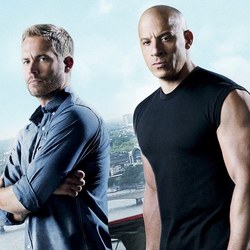 It’s been a couple of months since I took a look at Billboard’s Hot 100. I’ll spend the next two weeks catching up, and finding out how many new songs have cracked the charts during that time.

In the #1 spot is Wiz Khalifa with ‘See You Again,’ a song he recorded for the Furious 7 soundtrack. The song is ok, but its connection to Paul Walker’s death gives it added emotional depth.

Furious 7 was a kick-ass action movie (I refer to the series as the meathead Mission Impossible) but its loving send-off of Paul Walker’s character made it something more — a truly heartfelt tribute to a man this cast and crew had grown to love over more than a decade.

The film’s final shot, depicted in the video for this song, was a graceful and touching way to say goodbye.

[Hook: Wiz Khalifa]
How could we not talk about family, when family’s all that we got?
Everything I went through, you were standing there by my side
And now you gon’ be with me for the last ride

[Verse 2: Wiz Khalifa]
First, you both go out your way
And the vibe is feeling strong
And what’s small turned to a friendship
A friendship turned to a bond
And that bond will never be broken
The love will never get lost
And when brotherhood come first
Then the line will never be crossed
Established it on our own
When that line had to be drawn
And that line is what we reached
So remember me when I’m gone

[Bridge: Charlie Puth]
So let the light guide your way, yeah
Hold every memory as you go
And every road you take
Will always lead you home, home