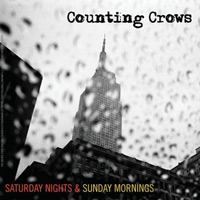 Five albums in 21 years? That doesn’t seem right. I do see, on Wikipedia, that the band has been in the studio recording their next release so maybe we’ll see something from them in 2014.

In the meantime, my wife and I will see them in concert next month. Their concert lined up coincidentally with a mid-week getaway we’d planned at the Seminole Hard Rock Hotel in Hollywood.

‘Washington Square’ is one of the better songs on Saturday Nights and Sunday Mornings. Adam Duritz described it this way (also courtesy of Wikipedia):

This is about my neighborhood and it’s about leaving it behind.

This is a song I started right after I moved here. I’d come back from tour, and I’d lost something, someone, and I was kinda faced with the prospect of going back out again, and it seemed like a hard thing to leave New York behind.

It’s a song about making a choice, to change, to go back to doing your life, to go on the road. But it’s also a song about how much you give up or risk giving up when you do that.