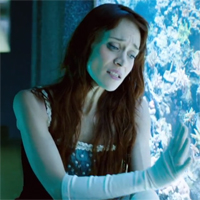 Fiona Apple has released some wonderful videos during her career, many courtesy of one-time boyfriend Paul Thomas Anderson.

My favorites are the big-band dance number they staged for the ‘Paper Bag’ video and the slow-mo black-and-white clip accompanying her cover of ‘Across the Universe’ (recorded for the film Pleasantville).

Watching those clips before today’s video makes it clear that the last 15 years have been hard on Ms. Apple. She was too thin in the late 90s, for sure, but these days she looks downright skeletal. Fortunately her voice (and songwriting prowess) are still in peak form.

The video for ‘Every Single Night,’ the first single from Apple’s celebrated The Idler Wheel…, is quite bizarre. Apple shares the screen with an octopus, snails, turtles and an alligator (most of which are either crawling on or perched on her body) and at one point walks along a Parisian bridge next to some sort of Godzilla-sized squid.

Does any of this mean anything? I don’t know. But it’s certainly attention-grabbing. I think my favorite moment in this video occurs in the final few seconds, when Apple breaks into a curious half-smile as if to say “What the hell are these people asking me to do?”

Every single night I endure the flight
Of little wings of white flame
Butterflies in my brain
These ideas of mine percolate the mind
Trickle down the spine
Swarm the belly, swelling to a blaze

Every single nights a light
With my brain

Every single nights a fight
With my brain

I just wanna feel everything x3

I just wanna feel everything