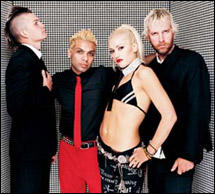 No Doubt is one of two bands on this list that feature lead singers who went on to solo fame in future decades. Gwen Stefani has enjoyed great success as both a performer and a fashion icon in the past decade. My daughters were just perusing her fashion line at Target.

But the Gwen Stefani of the 90s was a punk princess whose athletic front-woman posturing made No Doubt one of the most refreshing acts of the decade.

Tragic Kingdom, the album that featured today’s SOTD and ‘Don’t Speak,’ is bright and loud and bursting with invention. This record typified the ska sound so popular in the 90s but found room for odd detours like the disco funk of ‘You Can Do It.’

The band released two more albums, in 2000 and 2001, but Tragic Kingdom cements them as one of the signature bands of the 90s.

Take this pink ribbon off my eyes
I’m exposed
And it’s no big surprise
Don’t you think I know
Exactly where I stand
This world is forcing me
To hold your hand
‘Cause I’m just a girl, little ol’ me
Well don’t let me out of your sight
Oh, I’m just a girl, all pretty and petite
So don’t let me have any rights
Oh…I’ve had it up to here!

Oh…am I making myself clear?