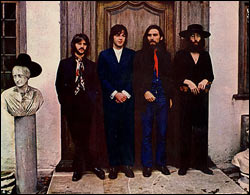 I don’t remember when I first became aware of ‘Hey Jude.’ It’s one of those songs that I’ve just sort of always known. I have only one specific memory of the song and it’s a rather lame one.

It came on once when I was bringing my high school girlfriend back to her house and we sat in the car listening to the whole thing. Those “na na nas” seemed to last forever. I’d love to spin that memory into something salacious but we were in fact just sitting and listening to the song. I told you it was lame.

‘Hey Jude’ was written by Paul for a young Julian Lennon, who was dealing with his parents’ divorce. It started out as ‘Hey Jules’ but Paul changed the lyrics, much as his “Father McCartney” became “Father McKenzie” in ‘Eleanor Rigby.’

The song was the band’s biggest hit and spent nine weeks at #1 on the U.S. Billboard chart, quite a feat for a song clocking in at more than seven minutes. I’ve always felt the coda goes on way too long (it takes up more than half the song’s running time) but I guess these guys knew what they were doing.

And any time you feel the pain, Hey Jude, refrain
Don’t carry the world upon your shoulders
For well you know that it’s a fool who plays it cool
By making his world a little colder