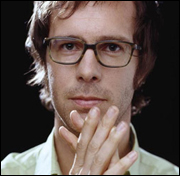 I don’t know whether this is more a sign of my insensitivity or my passion for music, but on September 11, 2001, I made a point to hit Best Buy to pick up Ben Folds’ new release Rockin’ the Suburbs (along with Bob Dylan’s Love and Theft). New albums always come out on Tuesdays and when my favorite artists are involved, I always buy them on the day of release. To alter that pattern because of an attack on the homeland would just mean the terrorists had won.

I know a reporter who, on the same morning, suggested he go to Circuit City to interview people watching the horror on the TV bank there just so he could pick up the Dylan album. So at least I’m not alone in my depravity.

To get back on topic, though, the other thing I remember about first hearing this album is how immediately its final track, ‘The Luckiest,’ struck me as perfect for Alex and me. As soon as I heard it, I e-mailed her the lyrics from my closet-sized office in Hollywood, Florida and awaited the “awwww” response.

The closing lines about the elderly couple definitely hit home, but the line I most identified with was “in a wide sea of eyes I see one pair that I recognize, and I know that I am the luckiest.” It reminded me of our wedding day, and how nervous I was standing in front of a church full of people — alone, heart pounding, afraid I wouldn’t remember my vows.

And then Alex started down the aisle, our eyes locked, and it sounds corny but I knew right then that everything would be ok, that I would never really be alone again.

I don’t get many things right the first time
In fact, I am told that a lot
Now I know all the wrong turns, the stumbles and falls
Brought me here

And where was I before the day
That I first saw your lovely face?
Now I see it everyday
And I know that I am the luckiest

What if I’d been born fifty years before you
In a house on a street where you lived?
Maybe I’d be outside as you passed on your bike
Would I know?

Next door there’s an old man who lived to his nineties
And one day passed away in his sleep
And his wife; she stayed for a couple of days
And passed away