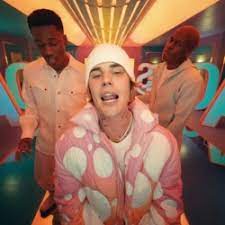 In the #3 spot on the Billboard Hot 100 is Justin Bieber with ‘Peaches.’ This is the fifth single from his 2021 album Justice.

After five anticipatory single releases, ‘Peaches’ was dropped the same day as Justice and both the song and album debuted at #1. Bieber became the first male solo artist to debut at #1 on both the Hot 100 and Billboard 200 charts simultaneously.