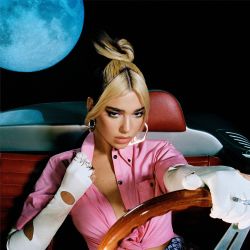 Dua Lipa sits at #5 on the Billboard Hot 100 with a remix of ‘Levitating’ featuring DaBaby. This is another case of an artist tweaking a song to squeeze out some additional time on the charts.

The original version of ‘Levitating,’ however, didn’t make it to the U.S. chart, though it did land on charts in several other countries. It took the DaBaby remix to get this one on the Hot 100, where it has spent 30 weeks, peaking right here at #5.

END_OF_DOCUMENT_TOKEN_TO_BE_REPLACED

With the exception of an album I will get to next week, my go-to jam during the coronavirus crisis has been Dua Lipa’s Future Nostalgia.

The London-born, Albanian singer-songwriter dropped this album three years after her self-titled debut, one of my favorite albums of 2017, and she managed to top herself. Lipa was forced to release the record a week early after an internet leak, but the timing turned out just right. It turns out a throwback disco album with a modern twist is just what the epidemiologist ordered during a worldwide quarantine.