Paul Simon hit a creative rough patch following the release of 1977’s Still Crazy After All These Years. His only new studio album over the following eight years was 1980’s One Trick Pony, a companion to his film of the same name, which contained exactly one memorable song: ‘Late in the Evening.’

But 1981 saw a resurgence for Simon in the form of his reunion Concert in Central Park with Art Garfunkel. Following that successful rekindling of their partnership, the two former bandmates started recording a new album.

END_OF_DOCUMENT_TOKEN_TO_BE_REPLACED

Today’s Random Weekend selection is the opening track from Paul Simon’s 1983 album Hearts and Bones. This was Simon’s first record in eight years following the release of Still Crazy After All These Years.

Fans who had been waiting with bated breath for new music from Simon must have been scratching their heads when the first song they heard was this bizarre track. Could a lyrical genius like Simon really be singing lines like “Where do allergies go when it’s after a show and they want to get something to eat?”

END_OF_DOCUMENT_TOKEN_TO_BE_REPLACED

This week I will feature five songs that, for lack of a better word, suck. But they are notable in that they were recorded by five artists I rank among the best I’ve ever heard.

What I think you’ll find is that all of these songs are interesting failures.

END_OF_DOCUMENT_TOKEN_TO_BE_REPLACED

Paul Simon’s Hearts and Bones carries a lot of baggage but I wasn’t aware of any of it when I first heard the album. I didn’t know it was a Simon & Garfunkel reunion album gone bad, or that it was a critical and commercial flop that seemed to derail Simon’s solo career.

My first exposure to the songs on this album came during a concert in the early 90s. I was familiar with everything Simon played that night except for two gorgeous, musically ambitious ballads — one called ‘Hearts and Bones’ and one called ‘Train in the Distance.’

END_OF_DOCUMENT_TOKEN_TO_BE_REPLACED 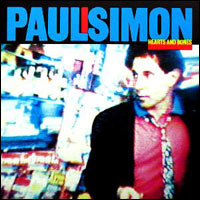 Following the success of their Central Park reunion show, Paul Simon and Art Garfunkel embarked on a world tour in 1982 and ’83. Riding the high of those performances, the duo headed back into the studio to record their first album together in 13 years.

The record had a working title of ‘Think Too Much,’ named after a pair of songs in its track list.