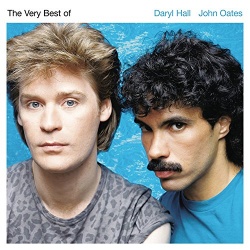 Daryl Hall & John Oates’ ‘Adult Education’ was released in 1984 as one of two new songs appearing on a greatest hits collection titled Rock ‘n Soul Part 1. The other new track was ‘Say It Isn’t So.’ ‘Say It Isn’t So’ made it to #2 on the Billboard Hot 100, while today’s SOTD peaked at #8.

Calling that collection a “greatest hits” was the opposite of false advertising. Every song on that record was a smash of one degree or another, with four tracks making it to #1. When even the two bonus tracks on your compilation become top ten hits, you know you’re on a roll.

A 2006 reissue of Rock ‘n Soul Part 1 featured extensive liner notes by bassist T-Bone Wolk. He writes about ‘Adult Education’ at great length, and I found his commentary interesting enough to include here in full:

The second new song we recorded was a nasty, down and dirty minor key funk-rocker, DH composition called “Adult Education” based around a repetitive classic chord structure of F, G, A minor – a sexual lyric for the “kids” hinting at their need for an “adult education.” It cleverly described SO accurately the carnal frustrations of a high school junior. I think Daryl & John finished up the lyrics right there in the control room with some help from Sara Allen after we all kind of reminisced about our high school experiences, ya know… waiting for the bell to let you out of homeroom… hoping to see that cool senior girl over by her locker… wondering if you’d ever get the nerve to say something.

It was Daryl & John’s desire to collaborate with multi-talented guitarist, producer and friend Nile Rodgers that gave this track its unique hypnotic groove. Nile jammed out the song with Daryl, myself, and a quirky offbeat hip-hoppy drum program from Jimmy B., and in a matter of a few hours, he composed his signature guitar riff, which drove the whole record along in a relentless way that only Nile was capable of.

A big brassy keyboard pad from Daryl, and a hooky “marimba” 16th note ostinato part in the second verse set this track apart from anything Hall & Oates had recorded to date. I held down the bottom with whole notes in the choruses and a funky, staccato riff in the verses, a nod to Chuck Rainey’s bass part on Aretha’s “Rock Steady.” G.E. added a very hard edge with his “Neil Young-ish” Gretsch track that worked sooo well against Nile’s phenomenally funky, thin, clean Stratocaster track. This all hitting its high when halfway thru the record… BANG… Mickey’s monstrous live drums make their appearance to set up the top of the outro!!!! It was a drum sound he and Clearmountain had been perfecting over the year, a combination of Mick’s powerhouse drumming, Bob’s radical miking technique and the incredible mystical sounds that you get recording in one of the great live tracking rooms at Electric Ladyland’s Studio A, the home to so many classic records, starting with Jimi Hendrix in the ‘60s and continuing with Led Zeppelin and Foreigner among others.

Looking back, it’s obvious that the creative forces present at these sessions allowed Daryl & John to forge a new, musical path, merging the technology of drum programming with the live performance of our band. You can pretty much say that “rock ‘n soul” sound that defined Hall & Oates recordings through the rest of the decade was a direct result of these two new tracks!

In addition, digital sampling had come on the scene in 1983 and was put to the test on “Adult Education.” It was decided that a “cheerleading” kind of girl group was needed for the chant “oh yeah, oh yeah,” so off John and drum tech Anthony Aquiltao went to our favorite 8th St. pizza joint, the Be Bop Café, and a group of waitresses was brought in to party up the track. They were then “sampled” into the “Fairlight” keyboard and manipulated and performed by Daryl one nite after the track was complete. The “uh” “uh” background vocals part in the second verse is actually Daryl playing the first syllable of the “oh yeah” on the Fairlight. You could take a vocal part or guitar part, or ANY musical phrase and “play” it wherever in the song you wanted it, anywhere in the bar, across the bar, WHATEVER sounded great to you. It was the beginning of a whole new approach to recording. No longer were you restricted to what was performed to tape. In fact, the entire background vocals outro for “Adult” was RE-constructed using this technique, a real revolution as it were, and of course, Daryl & John embraced it immediately.

[Verse 1: Daryl Hall]
Afternoon in the homeroom
They’re about to let you go
And the locker slam on the plan
You had tonight
You’ve been messin’ around with a boyfriend
Maybe better left alone
There’s a wise guy that you know could
Put you right
In the lot the boy that’s idling by
Doesn’t rev your heart
Cause it’s only lonely spots
He shares with you
And long halls and the gray walls
Are gonna split apart
Believe it or not
There’s life after high school
And that’s why

[Verse 2: Daryl Hall]
The teacher don’t know about how to deal
With the student body (huh, huh)
And the underclassmen are flashing
Hot and cool (huh, huh)
But your girlfriends care
About watch and wear
And talkin about it (huh, huh)
Believe it or not
There’s life after high school (huh, huh)
That’s right