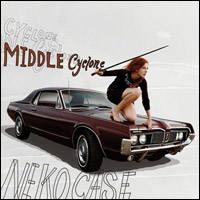 Recorded partly in a barn in Vermont, Middle Cyclone has the same earthy richness that makes all of Case’s work so resonant. Her powerful but melancholy vocals are the perfect complement to the music.

Though the instrumentation and vocals often receive the most praise in any Neko Case song, I’m just as impressed by her poetic lyrics. This song is a lovely example.

Baby, why am I worried now?
Did someone make a fool of me
Before I could show ’em how it’s done?

There were times that I tried
One for every glass of water that I spilled
Next to the bed, retching pennies in a boiling well, in a dream
That, at once, becomes a foundry of mute and heavy bells
They shake me deaf and dumb
Say someone made a fool of me
‘Fore I could show ’em how it’s done

It was so clear to me
That it was almost invisible
I lie across the path waiting
Just for a chance to be
A spider web trapped in your lashes
For that, I would trade you my empire for ashes
But I choke it back, how much I need love