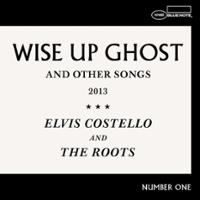 Elvis Costello loves to keep his fans guessing. This is the man who released an album of country music covers in between two of his poppiest efforts in the 80s. And an album recorded with a string quartet a decade later.

He has released collaborative albums with vocalist Anne Sofie von Otter, New Orleans R&B legend Allen Toussaint, Netherlands ensemble the Metropole Orkest, jazz guitarist Bill Frisell, symphonic composer Richard Harvey, and esteemed songwriter Burt Bacharach. None of those albums sound alike, nor do they sound like any of the “regular” albums Costello dropped in between them.

Wise Up Ghost is a 2013 collaboration with soul/hip-hop band The Roots that makes as much sense as any of those other collaborations.

In this case, Costello and The Roots sliced and diced his back catalog to come up with new songs rich with the DNA of previous work. Today’s SOTD, for example, is built around the bones of a song called ‘She’s Pulling Out the Pin,’ a bonus track on Costello’s 2004 album The Delivery Man.

I haven’t spent a ton of time with Wise Up Ghost since my initial purchase, but I’m always intrigued by what I hear when it pops up.

She came out high and kicking
While the band played “Hey, Good Looking”
Do you hear something ticking?

Did somebody tell her she could really be redeemed?
And could she actually be as desperate as she seems?
She’s tearing at the seams
She’s going to extremes
Nobody told her it was a sin
So she’s pulling out the pin

Full of shattered glass and mayhem
Not some softly whispered “Amen”